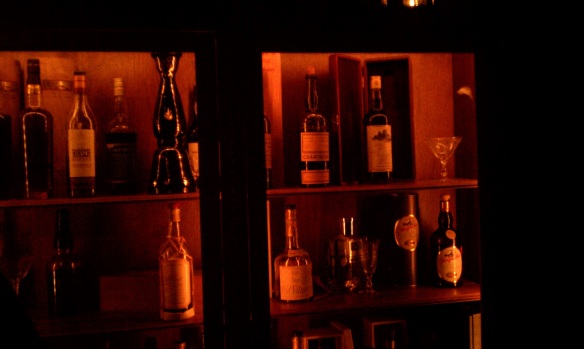 Let’s get real. I’m a little hungover this morning. But I have no regrets.

Last night, Will and I met my friend Sarah and her husband James at The Aviary, a cocktail bar that should really be called The Awesomeness (in my opinion).

This was no ordinary bar. Our drinks were creative works of art. Sarah was served a cocktail in a flask. One of the drinks Will ordered was encased in a hollow ball of ice, which he had to crack open with a tiny slingshot.

Yes, a tiny slingshot. You can’t make this stuff up.

Also, every single drink was DE. LISH. US.

I guess I should have expected nothing less from Grant Achatz of Alinea fame. (Alinea is the best restaurant in North America. Look it up.)

But one of the coolest parts about The Aviary is a secret, tucked-away room called The Office.

Sarah and James are Aviary vets, so they showed us first-timers a thing or two. Once we had finished our drinks in the main room, they slyly asked our server if we could go to The Office. She raised her eyebrow for a second, nodded, and said that someone would come by shortly to talk to us about our request. Mystery! Intrigue! It felt like we were doing something illegal.

A short while later, a young man with an earpiece escorted us downstairs to a locked, unmarked door. Just as I was about to ask why he was taking us to the janitor’s closet, he opened the door to a world of sheer coolness.

It was a dimly-lit room resembling a very rich person’s library with plush leather chairs, glowing bottles of liquor lining the bar and only enough space for about 10 people, tops.

When I went to the bathroom and they had to give me a key to get back in (the door was locked to keep out the riff-raff!), I was feeling pret-ty special, let me tell you. Almost special enough not to wince at the $20/drink price tag. Almost.

All in all, The Aviary was quite an experience. I would highly recommend visiting at least once if you are the type of person who can get over the feeling that you are drinking dollar bills (it’s not cheap, guys).

P.S. I would have taken more photos, but it was pretty dark in there and I’m fairly certain that using my flash would have been frowned upon. The photos above were taken in The Office, which had a bit more candlelight.