What’s my idea of the perfect Saturday night, you ask?

Hanging out with fun people at a cute little bar in our neighborhood. This is the Chicago summer I’ve been waiting for!

Last Saturday, we went out to dinner at the legendary Twin Anchors, the mere mention of which makes Will immediately yell out, “Ribs! And keep ’em coming!”

No, Will doesn’t have Tourettes – this place is actually known for their ribs and *supposedly* (according to the historical facts section of the menu) that’s how Frank Sinatra ordered one time when he was hanging out there with all of his movie star/crooner/gangster friends.

I opted for the BBQ pork sandwich because ribs are too messy and I just hate to stain my white kid gloves. But everyone else confirmed that the ribs were really good.

After dinner, we headed down the street to a little Irish bar. We got a table outside and proceeded to order approximately nine different drinks, even though there were only six of us at the table. Shots of Jameson were involved, and Will wanted a mimosa with his gigantic PBR. I also got a mimosa. They were on special for $3, if that makes it seem a little less weird. I’d like to thank the server for going along with it and acting like this was a normal request at 7:30 on a Saturday night.

Later, after I was well on my way to drinking waaaaayyy more than I had planned, we headed inside to play giant Jenga and Connect Four.

Jenga! Connect Four! And they were giant! 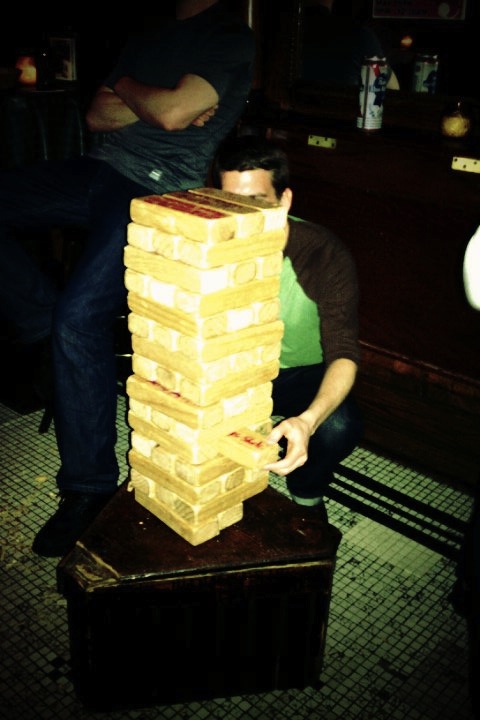 I apologize for the blurriness of the photos. But I think they pretty accurately represent the way I was seeing things at that particular moment in time.

I’d also like to mention that this bar had free popcorn AND a jukebox. So we stayed there Lionel Ritchie style – All. Night. Long. (I can’t take credit for that – I think I just heard it on TV recently?)

The best thing is that this obscene amount of funness (I’m not going for a Pulitzer here) is all within a quick walk from our house!

I might just have to borrow my friend Dan’s shirt: